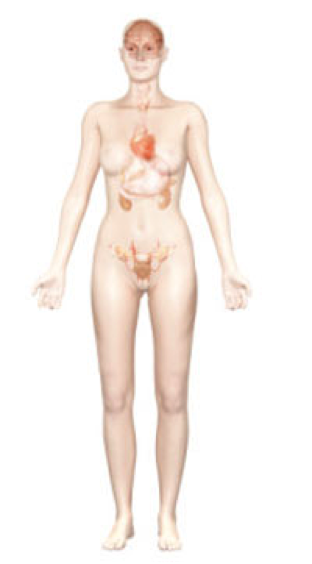 Most carcinogenic tumors are known as Carcinomas and are produced from gland cells, as those on the breasts or prostate. Frequently, carcinomas appear on apparently non-gland organs, as the lungs or the large intestine. Even on these cases, these common types of malignant tumors were born inside the microscopic glands that exist by thousand of millions in the intestinal and respiratory conduits.

However, sarcomas never come from glands, and that is what differentiates them from carcinomas, which are the most frequent and known tumors, mostly breast, lung, prostate or Colon cancer. Sarcomas affect the tissues that support and connect the different parts of our body. First, there is the skeleton, where bone sarcomas originate. All sarcomas not belonging to the skeleton are labeled under the term soft tissue sarcoma.

Soft Tissue Sarcomas affect tissues like muscles, fat, nerves, or blood vessels. There is also a tissue known as connective that is present everywhere on our body. It is composed of a sort of close-knit fabric over which the rest of the cells find support and structure. Soft Tissue Sarcoma can also appear on connective tissue. With the clear exception of Kaposi Sarcoma, caused by a virus linked to the AIDS culprit HIV, we ignore what causes a soft tissue sarcoma. With some rare exceptions, soft tissue sarcomas are not hereditary and the epidemiologic relations linking them to some herbicides or industrial contaminants are very weak so far.

Most of sarcomas appear on the limbs, but this is just a consequence of the fact that most of the muscles, blood vessels and nerves are located alongside the arms and the legs. Sarcomas can appear everywhere. There are superficial sarcomas; on the skin and chest or abdominal walls. There are some around the head and the neck, and also deep inside the thorax, the abdominal cavity or the pelvis. It is also possible that sarcomas could appear on the organs and the viscera. However if, is a sarcoma appears, for example, inside the stomach, it will be different to a stomach carcinoma, which is what we are talking about when we usually say stomach cancer. The stomach carcinoma, (or common stomach cancer) will have been developed from the minuscule glands covering the stomach’s walls. Stomach Sarcoma, however, will have been created from the muscles that form the viscera walls, from the nerves that endow sensitivity, from of the veins and arteries that carry blood around that area, from the fat covering the stomach, or from the connective tissue present everywhere.

When soft tissue sarcomas appear on the limbs, the most common symptom is the appearance of a little lump. On the most aggressive sarcomas, the lump grows quickly, alerting both the patient and his or her primary physician that something serious is going on. On other cases, sarcomas behave in a more concealed way, and the lump grows so slowly, for months or even years, that only when pain appears during the advanced stage motivates the patient to go to the doctor. Also, as most patients are young people, it is common that neither the doctor nor the patient’s family consider cancer as a possibility to take into account at the beginning. Frequently slow growing soft tissue sarcoma patients show a long clinical story with plenty of diverse diagnosis and failed treatments as anti-inflammatories, massages or even rehabilitation. Any tumor with recent appearance or growth over three centimeters of diameter must be considered as a sarcoma suspect, even in the absence of pain.

To diagnose any sarcoma a biopsy is needed, meaning to obtain a little fragment of the malignant tissue to be observed on the microscope. The specialist in charge of confirming the diagnosis is the pathologist. Even though the patient may never meet this doctor, the role of the pathologist is crucial on any sarcoma team or unit, and the fate of the patient depends on him as much as on the oncologist or the surgeon. Sometimes sarcoma diagnosis is simple, just needing to dye the tissue with a couple of special colorants, cut in extremely thin slides and analyzed under the microscope. Other times, though, things are not that easy and dyes with antibodies or DNA analysis are required. A simple sarcoma diagnosis can be achieved in a couple of days by most pathologists, but it is not uncommon that more complex cases end taking one or even two weeks of biopsy work.

The pathologist not only confirms the existence of sarcoma, but also points exactly at which of the hundreds of possible types it is, how aggressive it is and, after its final extirpation, needs to be sure that the extirpation margins are clean of malignant cells. Surgeons and oncologists can only select the best treatment for each case if they have an accurate pathological diagnosis. This is so important that, when a patient that has already received a diagnosis checks with a sarcoma specialist to get a second opinion, the first thing that is required is the biopsy so another pathologist from his team can analyze the sample again.

There are hundreds of types of soft tissue sarcoma. Plus, it is not uncommon for sub varieties to exist. So, for example, liposarcoma is a kind of soft tissue sarcoma, and myxoid liposarcoma is a sub variety of liposarcoma. On the other hand, commonly both benign and malignant versions of the same tumor can appear. Usually the name of the benign tumor ends with an –oma suffix, while the malignant version ends with a –sarcoma. For example, lipoma and leiomyoma would be the benign varieties of liposarcoma and leiomyosarcoma respectively, the latter truly malignant. The difference between benign and malignant versions of this kind of tumors is not always clear. Sometimes even the pathologist is unable to differentiate between them. On other cases, the benign tumor ends becoming on its malignant counterpart, usually after years and several relapses.

The difference between the different versions of soft tissue sarcoma is academic sometimes, without practical consequences. Other times, it is just the diagnosis of a precise type, and not another, that marks the prognosis and pushes the doctor towards a specific treatment. This is a very specialized terrain that not even most surgeons, pathologists and oncologists are familiar with. Next we are going to highlight some of the most remarkable traits of the most common types of soft tissue sarcoma.